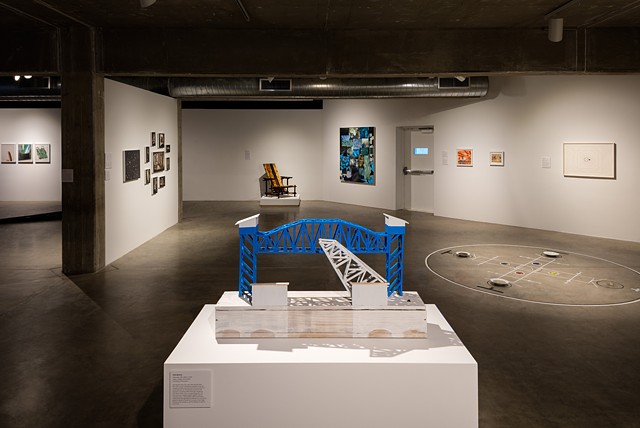 I moved to Galveston in 2011 just after getting married. I would drive to Houston a few times a week to teach. The island sits a mile off the mainland and is connected by a causeway. The train runs next to the causeway with its own bridge and a drawbridge to let the tankers through. When we moved there was a 150' foot drawbridge that was put into place in 1915. It was being replaced by a 305' span lift bridge. I would watch them assemble the new bridge on land as I drove off the island. They barged it into place before they removed the old one. For a day, February 14, 2012, both bridges were in place. They removed the old bridge and prepared it to travel to California, where it would replace an even sillier bridge.

This piece was originally made for "Mapping Galveston" at the Galveston Artist Residency in 2012. I this second version in 2015 for "Island Time" at the Contemporary Arts Museum, Houston. In the second version the white bridges moves up and down by pressing a button.